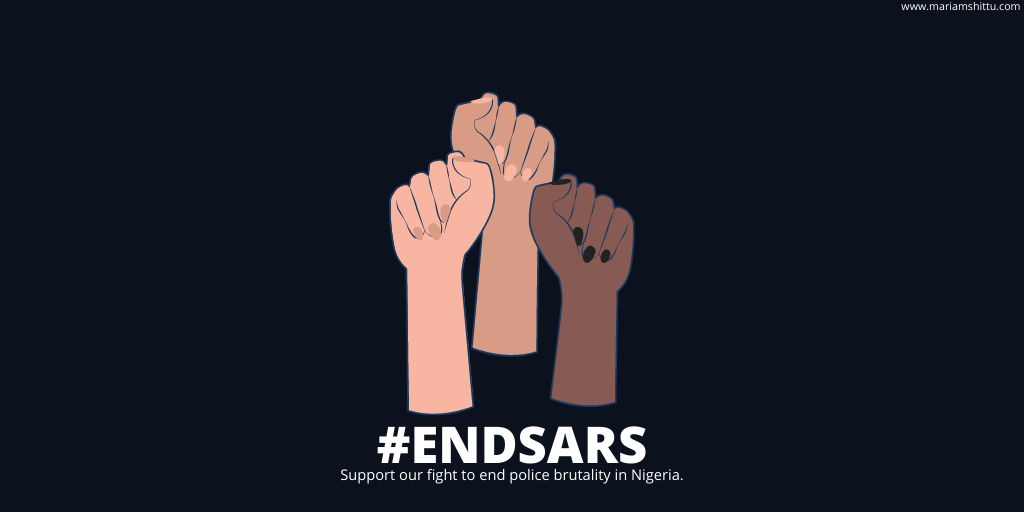 For the past few days, #endsars has been trending worldwide and even if you aren’t Nigerian, you must have stumbled across it on social media or the news. The Special Anti-Robbery Squad (SARS) is a section of the Nigerian Police Force that exists specifically to combat armed robbery in Nigeria. However, these officers have been terrorizing people especially youths since their existence. If you are young, have a gadget, an interesting hairstyle or a laptop, and happen to be stopped by them, you’re in for it. Sometimes, you don’t even need to have these things to be at their mercy.

One in three young people in Nigeria has been extorted, beaten, detained and in some cases killed for no just cause by SARS. In recent times, the harassment and killings have taken become worse and we’ve had enough. Hence, youths have taken over the major streets in various states across the country to protest. Protests have been holding nationwide since Thursday the 8th of October, and it wasn’t until yesterday that we heard back from the government.

The Inspector General of Police addressed the nation yesterday, 11th of October where he said that the Special Anti-Robbery Squad (SARS) had been dissolved across all the thirty-six states of the country and the Federal Capital Territory. When we heard this, we were excited that our voices had been heard and before we could celebrate, the terms of the dissolvement were released which made us angrier.

The news was announced yesterday afternoon with the hope that the protests would stop today but there’s no stopping us now until our demands are met. Major roads have been blocked with protesting youths nationwide to make things uncomfortable for everyone “important”. When you analyze the issues from a bigger picture, what we’re asking for is not too much and it’s sad that we have to resort to this. Regardless of our cries, people have still been assaulted, detained and killed by the police during these protests.

We know that the duties of the police is essential and crucial to the nation but the Nigerian Police Force needs a reform. The trigger happy officers need to be trained on how to police and jailed for their crimes. We also need a government that is responsible and accountable for everything it controls.

If you’re reading this in Nigeria and plan to join the protests, please hold a government issued ID card and try to minimize the gadgets in your possession. Also, be with friends in a group and don’t stay isolated, there is safety in numbers. You can search the hashtags on socials for details of protests happening around you.

I’d like to use this opportunity to appeal to you to support this movement in any way you can. Your voice matters. Read about it. Write about it. Talk about it. Educate people about what is happening in Nigeria. You can also support by donating; flutterwave.com/pay/endsars

Join us to #endpolicebrutality in Nigeria.